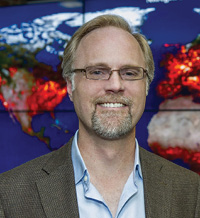 Bryan Duncan is a research physical scientist at NASA Goddard Space Flight Center and Project Scientist for the NASA Aura satellite mission, which has observing air pollution as one of its objectives. In his research, he uses satellite data along with atmospheric chemical models to understand how air pollution levels are changing around the world. He also developed and regularly contributes content to his Air Quality Observations from Space.

Bryan’s team, which includes personnel from the World Resources Institute (WRI), will develop a methodology that incorporates a suite of cost-effective and publicly-available products, including satellite data, NASA’s GEOS Composition Forecast (GEOS-CF) global air quality forecasts, potentially low cost sensors, and webtools, to address the AQ needs in a series of 10 pilot cities. These data sources cover the range of spatial and temporal scales necessary for policy decisions at minimal cost and are much less expensive than a traditional surface monitor network.